Showing posts from March, 2010
Show All

Speeding up the iPhone

March 15, 2010
So my iPhone 3G was starting to feel very sluggish - I could literally start counting the seconds off between clicking on the Safari or iPod icons and when I could actually do anything in either app. Didn't remember it being this slow, but I thought it might be just me justifying to myself why I needed a 3GS, especially since neither powering off and restarting nor clearing the Safari cache didn't speed it up. But then I tried loading and force-quitting all the apps I use with any regularity, particularly Safari/iPod/Mail, and it has dramatically sped up the loading of each of these apps (based on the time-honoured method of counting off "one-Mississippi" between load times).    I wonder if that means the iPhone apps could be hogging some resources, even if they don't seem to be running? Well, whatever works.
Post a Comment
Read more

View from the Mimolette carpark. 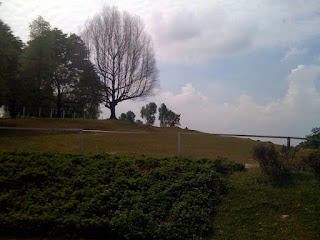 There was something about how wild this landscape seemed, right in the middle of Singapore. That, and the dramatic leave-lorn tree.
Post a Comment
Read more

March 08, 2010
I watched The Hurt Locker last night. A deserving Best Picture. Bigelow is a great action director. You always have a sense of space, where all the action is taking place, and where all the known threats could come from. The pendulum of the film's rhythm swings between tension and release, much, one supposes, like the work and life of the protagonists. Kathryn Bigelow, incidentally, turns 59 this year. James Cameron does seem to fall for strong, capable women. Staying with them - not his forte, apparently. Single transferable voting was used for the Best Pic decision. Hendrik Hertzberg over at the New Yorker predicted it would bode well for The Hurt Locker . Probably spot on in his analysis. Was this used for the other categories? Much has been made of the fact that there were 10 Best Picture nominees this year, but I can't get too worked up over that. There are 10 actors nominated, split by gender; 10 supporting actors nominated, again split by gender; and 10 screenpl
Post a Comment
Read more

The li'l bunnies. Toby's the shy one on the left. Amber's the impish one on the right. Okay, not that impish in this shot, but the number of wires she's bitten through is a veritable trail of destruction.
Post a Comment
Read more

March 04, 2010
All right, this might not be of interest to anyone but fellow Blogger users, but Blogger basically is pulling the plug on FTP support , which this blog has hitherto been publishing with. And asking us to use Google Custom Domains. Which is all fine and dandy, since they made a Migration Tool for it. Except - wonder of wonders - the Migration Tool pretty much is crap if you're publishing on www. Groan. The long and short of it: tell me if any files appear missing!
Post a Comment
Read more
More posts